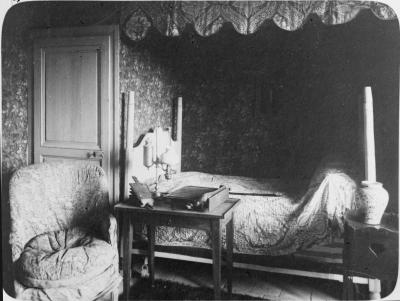 History of the museum

The château de Saché has been a museum dedicated to Honoré de Balzac since 1951. At that time it belonged to Paul Métadier (1872-1956) who had bought it in 1926 to complement the forest estate of the château de Valesne where he lived. During that period, the château had fallen into abandon and Paul Métadier intended to restore the residence which had housed Honoré de Balzac. On 11 May 1932, he managed to get the château registered on the French Supplementary Historic Monument List. And during the Occupation (December 1942), he managed to have the site listed by the French administration in order to ensure its protection, given the sporadic stays of German troops at the château. From the 1930s onwards, Paul Métadier dreamt of turning it into a residence for writers. However, his son Bernard-Paul (born in 1918), having developed a real passion for Balzac, suggested creating a museum dedicated to the famous author instead. In 1943, Paul Métadier told a journalist of his agreement with the idea of a museum and summarises the concept: "I would like to give this old dwelling back all the appeal that it deserves and turn it into a museum. Doubtless, there are other Balzac museums; but Saché will have the special charm of an essentially romantic setting, which has remained as it was a century ago. The old stone of this house is still so steeped in the spirit of this literary giant that there is not so much to be done from a material point of view, in order to give Saché back the stirring atmosphere that many people of Touraine have already witnessed."

At the time of its creation, the museum had only a few rooms, including the reception rooms and Balzac's bedroom. In 1958, the Métadier family gave the château and the first of the museum's collections to the Indre-et-Loire General council. Major works were begun in 1964, up until the beginning of the 1970s to secure the building, make the premises accessible to the public and adapt them to the installation of museum spaces.

Bernard-Paul Métadier was the museum's curator from 1958 to 2001. Since 2002, the Balzac museum has held the appellation of "musée de France".