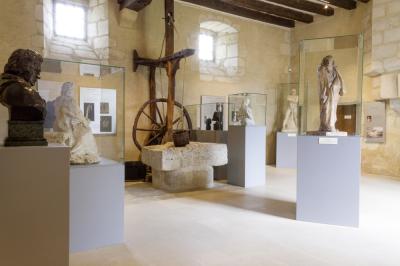 The Balzac museum's collections hold around 2300 pieces (sculptures, paintings, prints, manuscripts, engravings, drawings, photographs, printing equipment and furniture). These collections have been put together largely thanks to six donations from the Métadier family and Bernard-Paul Métadier to the Indre-et-Loire General council. Moreover, they have been enhanced with several acquisitions of the Indre-et-Loire General council.

The Balzac museum's collections of prints (around 1000 pieces) mainly comprise valuable pieces donated by Bernard-Paul Métadier and from the Samueli collection. Through various donations, Bernard-Paul Métadier has enhanced the Balzac museum's collections of prints with pieces of personal interest to him. Thus, emphasis has been placed on certain themes: Balzac's Touraine, Balzac's Paris, Balzac and science and Balzac and printing. The Samueli collection was acquired by the Indre-et-Loire General council in 2002 with the financial support of the DRAC (Regional Cultural Affairs Directorate) and the Centre region. It comprises around six hundred bound volumes. It is a remarkable collection gathered over several decades by the avid collector Jean-Jacques Samueli. This collection notably comprises all of Balzac's early works that he published under various pseudonyms. These first works of a then unknown author are virtually impossible to find nowadays. This collection also contains almost all of the first editions of Balzac's novels and short stories, beautiful illustrated copies, collective editions and Belgian and Dutch "prefaçons" (unauthorised preprints) and counterfeits.

Among its collections of manuscripts (letters from Balzac and his contemporaries), the Balzac museum holds three collections of corrected proofs of the novel The Lily of the Valley, which are the second, third and fourth dossiers of proofs from all of the documents which enable us to retrace the origins of this novel (the manuscript, galleys and other dossiers of proofs are held at the Institut de France in the Spoelberch de Lovenjoul collection. It also has corrected galleys of La Chine et les Chinois (China and the Chinese) - nine folios corrected by Balzac - and an edition of Louis Lambert annotated by Balzac.

Since 2013, the Balzac museum has displayed the portrait of Madame Hanska's daughter and the portrait of her son-in-law by Jean Gigoux, as well as a portrait of Mister Hanski by Giuseppe Bezzuoli. These are part of collections on loan from the Maison de Balzac (Paris).

Balzac has been depicted by several sculptors, including David d’Angers, Marquet de Vasselot, Auguste Rodin and Alexandre Falguière, whose works are exhibited in the Balzac museum. Commissioned by the Société des Gens de Lettres in 1891, Rodin's piece was the subject of a great many preparatory studies including several plasters and bronzes, which enable us to retrace its origins (Balzac museum collections and depositories).

Among its collection of engravings, the Balzac museum holds numerous caricatures from the first half of the 19th century. This style of art, which fits particularly well with the studies of human nature that Balzac wrote, was in fact developed during this period. It is worth noting that the writer, very much involved with the press, was often a target of caricaturists.

A 19th century print shop is reconstructed, to remind visitors of the printer's trade that Balzac practised from 1826 to 1828. It contains a Stanhope printing press, a lithographic press from the middle of the 19th century, a bookbinder, an old cutter and type cases.