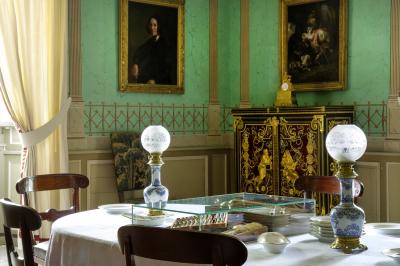 Balzac at the château de Saché

Born in Tours in 1799, Honoré de Balzac went to live in Paris at the age of 14. From 1825 to 1848, the novelist stayed at Saché about ten times. This place was, for him, not only a refuge away from his creditors, but also a "monastery" of calm, which he used to write and to recharge his batteries. From the 1830s, the writer suffered from lung and heart problems. His physician, doctor Nacquart, thus ordered him to regularly go and breathe his native air in order to recover from the overly intense hustle and bustle of Paris. Balzac's stays at Saché were sometimes punctuated with long walks in the estate's centuries old woods, visits to the château owners in the area and games of whist and backgammon with Jean Margonne, the owner of the place.

Throughout the summer of 1823, Balzac stayed in Tours and Vouvray, at the home of Jean Margonne's father-in-law, Henry-Joseph de Savary. In a letter to his sister Laure Surville, he considered going to Saché: "I shall go to Saché and come back soon to see you at Ch[amp]rosay since, except from the air and the sky which is entirely blue, Touraine's inhabitants are meek and cowardly"  (Honoré de Balzac, Letter to Laure Surville, Tours, summer 1823).

In the autumn of 1825, Balzac went back to Touraine accompanied by his mother and his younger brother, Henri, presumed son of Jean Margonne. At Saché, Balzac wrote to the Duchess of Abrantès, sorry that she was unable to join him.

While writing intensively for various Parisian newspapers, Balzac takes the time to come and have a break in Touraine with his lover Madame de Berny during the summer of 1830. They rented La Grenadière for two months, a house in Saint-Cyr-sur-Loire, from where they went on getaways to Le Croisic and Guérande. Balzac returned to Paris in September. During the July Revolution he was far from Paris, very probably en route to Saché. "I can assure you that I feel like a very brave man to admit that I was travelling along the Indre during our glorious days", (Honoré de Balzac, "Lettre sur Paris", published in Le Voleur, 30 September 1830).

In August 1831, Balzac puts on sale the first edition of La Peau de chagrin (The Magic Skin). From Tours, Jean Margonne wrote to Balzac of how difficult it was to get hold of the novel of whose success he had read in the newspapers. And even if he intended to take it to the countryside to read it, he deemed that not enough to make up for conversations he hoped to have with the author in September. In the end, Balzac stayed for an extended period at the château de Saché, between late October and mid-December 1831. Letters exchanged with his publishers and his friends testify to the author's intensive writing schedule for Maître Cornélius (Master Cornelius) and the Contes drolatiques (Humorous tales): "I live under the harshest of despotisms - that which one imposes upon oneself. I work night and day. I have come to take refuge here in the depths of a château, like in a monastery." (Honoré de Balzac, Letter to Zulma Carraud, Saché, 21 November 1831).

On 8 June 1832, Balzac returned to Saché where he stayed for over a month. From his little room on the second floor, he gave his mother instructions for her to follow up on his business in Paris, in particular sorting out his financial problems... Balzac set to writing Louis Lambert at a frantic pace. However, he also took advantage of his stay at Saché to organise his possible marriage to a rich widow from the area, Baroness Deurbroucq. Balzac left Saché on 16 July 1832, having to make the journey to Tours on foot, in the scorching heat.

In September 1834, after the publication of  La Recherche de l'Absolu (The Quest of the Absolute), Doctor Nacquart found Balzac to be so exhausted that he ordered him to breath his native air. Therefore, Balzac spent several weeks at Saché, where he started Le Père Goriot (Father Goriot), he hoped to finish Séraphîta and he corrected the proofs of Cesar Birotteau.

Balzac fled to the Indre valley in June 1836, shortly after having won his court case against Buloz regarding Lys dans la vallée (The Lily of the Valley). Even though Balzac took advantage of his stay to rest up, he nonetheless started drafting the first part of Lost Illusions at Saché, working for up to fifteen hours a day: "Touraine had revitalised me so much that Thursday, Friday, Saturday and Sunday I came up with the Lost illusions, and I wrote the first forty pages of it". (Honoré de Balzac, Letter to Émile Regnault, Saché, 27 June 1836).

After spending several months in Italy, Balzac recharged his batteries at Saché for around ten days in late August, in order to get over an inflammation of the chest. With a view to permanently evading service in the French National Guard, for a while Balzac considered withdrawing to Touraine, in a little house on the banks of the Cher or the Loire.

At the beginning of June, Balzac took the train to get to Touraine quickly, with a view to buying a home there for himself and Madame Hanska. He stayed at Saché for a few days with Jean Margonne, who, between two games of backgammon, advises him to purchase the Château de Moncontour in Vouvray, a project which Balzac was to abandon two months later.

Balzac stayed at Saché for the whole month of June, far from the hustle and bustle of Paris. But he didn't find inspiration to write Les Petits Bourgeois (The Lesser Beorgeoisie). He dedicated most of his time to going for walks and playing games of whist. But, at the end of his stay, Balzac started to feel the first symptoms of a serious heart condition. In September, he went to meet Madame Hanska in Ukraine where he stayed for a year and a half.