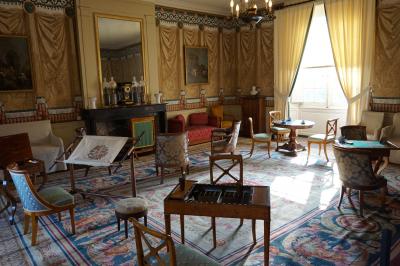 Visitors begin the tour by entering the museum through a bossed door, followed by a straight 17th century staircase which leads directly up to the first floor. The reception rooms then plunge visitors into the first half of the 19th century. The (French MH listed) great hall  is home to the spectacle of astonishing trompe-l’oeil wallpaper dating from the first quarter of the 19th century.  Balzac played whist (a card game) and backgammon (a dice game) with Jean Margonne in this dramatised setting. In the (French MH listed) dining room, the wallpaper from the first quarter of the 19th century has been reconstructed according to an original panel. The frieze of mythological scenes was inspiration for the description of the decor in the living room of the Vauquer  boarding house in Father Goriot, the manuscript of which Balzac wrote at Saché in 1834.

The tour continues on the second floor. After going up a 15th century spiral staircase, visitors discover the intimacy of the (French MH listed) bedroom where the author of The Human Comedy worked long hours, drinking numerous cups of coffee in order to stimulate his imagination. The other rooms on this floor give an insight into Balzac's life in Touraine, his work and his relationship to Touraine, by means of permanent collections (prints, manuscripts, engravings, paintings and sculptures).

The tour ends on the ground floor of the museum. A 19th century printing shop is reconstructed to remind visitors of the printer's trade that Balzac practised from 1826 to 1828. The Rodin room is dedicated to the sculpture that the artist created at the end of the 19th century, commissioned by the "Société des gens de Lettres" - several plaster studies and bronze casts are displayed alongside pieces by David d'Angers and sculptor contemporaries of Rodin (Alexandre Falguière, Marquet de Vasselot).

The two hectare park surrounding the château beckons the visitor to take a romantic stroll to discover viewpoints of the village of Saché, the Indre valley and the "tranquil and solitary valley" described in the novel The Lily of the Valley.