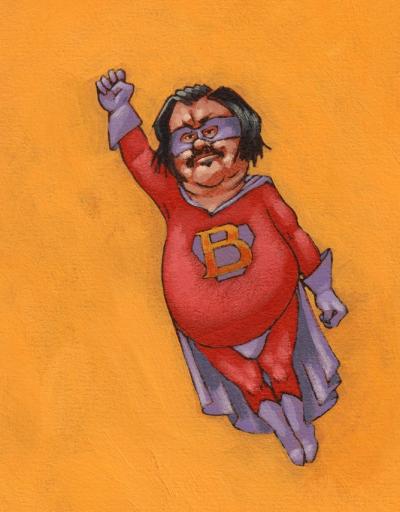 The illustrator Titwane painted Honoré de Balzac in seven funny portraits capturing the novelist in 2011. Unlike traditional depictions of Balzac, Titwane has highlighted the many sides to the super-writer and his mammoth Human Comedy. So, be it Balzac the backpack-wearing hiker or the director sitting in his chair with a megaphone, Titwane underlines the wealth of Balzac's work so we can re/visit it through the prism of geography, cinema, theatre, art, museum and even food & drink.

TITWANE, pseudonym of Pierre-Antoine Thierry, illustrator and ‘scrapbooker-illustrator’. Following scientific studies, he began his professional life as an engineer before deciding to forge a career in illustration, his passion, at the end of the 2000s. A self-taught artist, who had always drawn for as long as he can recall, he is forever devoted to the pleasure of inventing, outside the scope of any school of creation or graphic art teaching. This freedom of expression has led him to work for the press (Le Parisien Magazine, Libération, La Croix, La Revue Dessinée, La Revue XXI, etc.). And, since 2013, he has excelled in illustrated reporting-documentary for Éditions de la Martinière. He is the author, along with Raynal Pellicer, of the books Brigade des mineurs, immersion au cœur de la brigade de protection des mineurs (Police Juvenile Squad, immersion at the heart of the juvenile protection squad) (2017 – 24e Prix France Info 2018 de la BD d'actualité et de reportage (2018 France Info Award for topicality and documentary comic strip), Brigade criminelle, immersion au cœur du 36 quai des orfèvres (Crime Squad, immersion at the heart of 36 Quai des Orfèvres) (2015) and Enquêtes Générales, immersion au cœur de la brigade de répression du banditisme (General Investigations, immersion into the heart of the organized crime crackdown squad) (2013). His boldly-drawn, accurate strokes capture the precise moment of everyday scenes and echo La Comédie humaine (The Human Comedy), with the intention of heightening contemporary society awareness. Yet, Titwane also stands out through his poetic illustrations, where the comprehension of the interlaced patterns unveils the profoundness of the images. He created a series of boards for Quand la nature inspire les écrivains (When nature inspires writers) (2015) and for the Esprits de nature (Spirits of Nature) collection published by Plume de carotte, where portraits of famous writers interweave with their references to nature. Titwane’s humour is displayed more so in his illustrations for children’s literature, such as the series Oscar le Médicus (Oscar Pill) by Eli Anderson for Albin Michel Jeunesse (from 2014) and the series “Enquêtes au muséum” by Laurence Talairach published by Plume de carotte (15 volumes since 2017). Detailed bibliography on https://titwane.fr